Games have not only long since entered our lives but have also become a part of our culture. Naturally, games in one way or another affect not only the gamers themselves but also their environment, their attitude to themselves and others. One might think that this influence is only negative. What is really going on? Is this hobby useful or not? Let’s drop all prejudices, look at some popular stereotypes and find out exactly how games affect a person.

#1 Games are only for children

“Only elderly people watch TV”, “only men drive well”, “people older than 50 do not use the Internet”, “cats are more popular than dogs” and “only children play video games”. You can say “but cats are indeed more popular”, however the statistics from Instagram for 2019 shows that there were uploaded 30% more photos with dogs than with cats, although pictures with cats have more requests in Google. Similarly, everything else is also relative.

There are different categories of games that have a target audience. Specifically, mass products, the games of AAA class oriented to adults. It is unlikely that children will understand the complex and sometimes confusing plots of many games. In addition, the budget for the development of such games is several tens of millions of dollars. Children are not a solvent audience and the gaming industry in its current form could not exist solely with it.

Let’s have a look at the distribution of video gamers worldwide in 2017, by age group and gender. 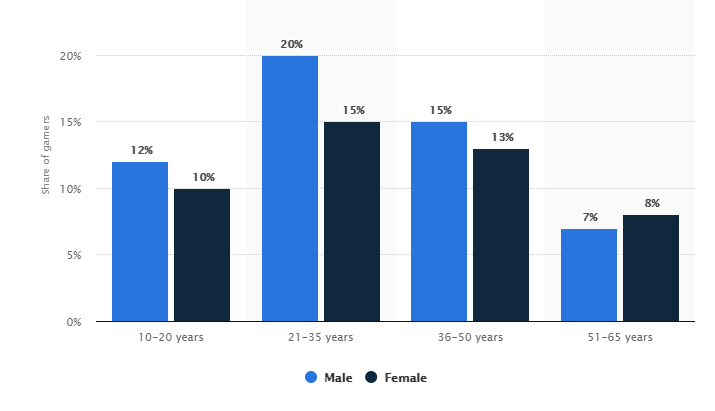 As you can see the average age of gamers is about 30 years moreover, females occupy a considerable share of them, which is also the disclosure of another myth that only males play video games. There are more than 2.5 billion video gamers from all over the world (The European Mobile Game Market, 2016).

When we talk about video games we must take into consideration all segments of the industry. Platform statistics shows that smartphones and consoles account for a large proportion of video games. 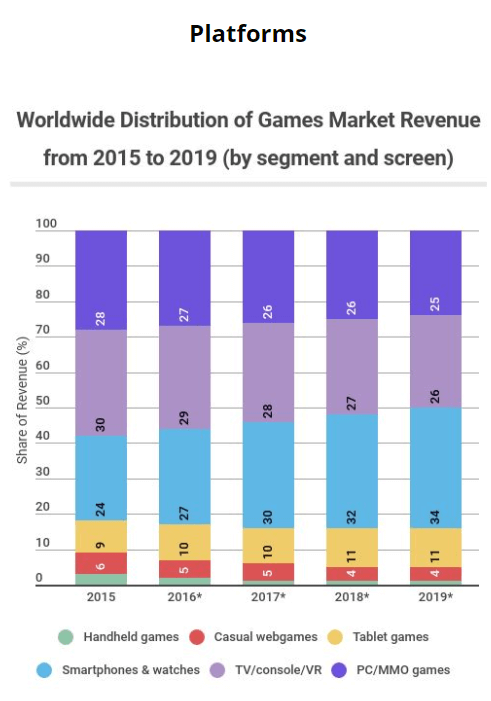 Even celebrities do not mind spending time playing video games. Elon Musk in one of his interviews said that he likes to play different genres of video games and calls it one of his favourite hobbies. According to his words, he became who he is now because of the video games as they have given him an interest in programming.

#2 Games are a waste of time

In general, when someone claims that video games are generally meaningless, you first need to understand what exactly is it about and what is the context. If we are talking about electronic sports, then this is first and foremost a full-fledged work, where training in intensity is in no way inferior to traditional sports. Only in this case, not the body is being trained, but reflexes and strategic thinking.

During the preparation for the tournaments, conducting the game 10 hours a day is normal. Earning of a good professional player is about 7,000 dollars a month and winning a tournament can provide a player for the rest of his life. This year, for example, the prize fund for winners in “Dota 2 The international” will exceed 30 million dollars.

If we are talking about traditional gaming, in single-player story games, then it is more correct to treat them as modern art. No one considers theatre and cinema as a waste of time, no one considers reading fiction literature useless – these are generally recognized as cultural entertainment. But the attitude to games in some circles is different, which is rather strange because books and movies tell us a story that we can’t influence in any way, we can’t become part of it, we can only take note of it and be inspired by the characters and atmosphere.

In a game, on the other hand, we become the central hero of what is happening. Someone may say that these stories are primitive and do not carry anything except empty amusement, but in reality, many games can raise serious topics and help broaden your horizons. In addition, many gamers learned English precisely thanks to games, because not every game is translated or translation is often much worse than the original. 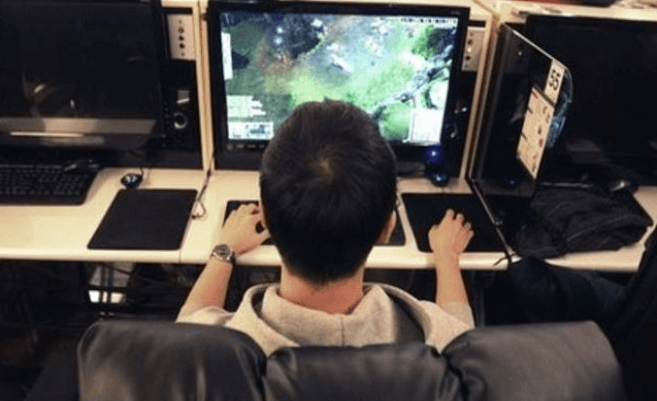 Ultimately, the most important thing is how games affect our brain. In 2016, the journal “Social Psychiatry and Psychiatric Epidemiology” published the results of cooperative research with universities in the USA, France, the Netherlands, Germany, Turkey, Romania, and Bulgaria. The participants were 3,000 schoolchildren aged 6 to 11 years. The goal of the tests was to check the impact of video games on children’s mind, as well as on the development of social and cognitive skills. Almost a quarter of the pupils played more than five hours a week and it was found that the popular judgment about people who play mostly to get away from real problems is not true. Children within complete families are more willing to play than those where the family has only one parent or who has no brothers and sisters. This is due to the fact that children from complete families are happier and accordingly more inquisitive.

Video games are probably the only occupation that gives a uniform load to three information channels at once. Vision allows you to notice the details and react to what is happening. Hearing perceives sounds that serve not only as a background but also as part of the gameplay. And also motility, because everything that we see and hear is reflected in the movements of the fingers. Thus, all the main parts of the brain are loaded and it is important that they are loaded simultaneously and evenly. 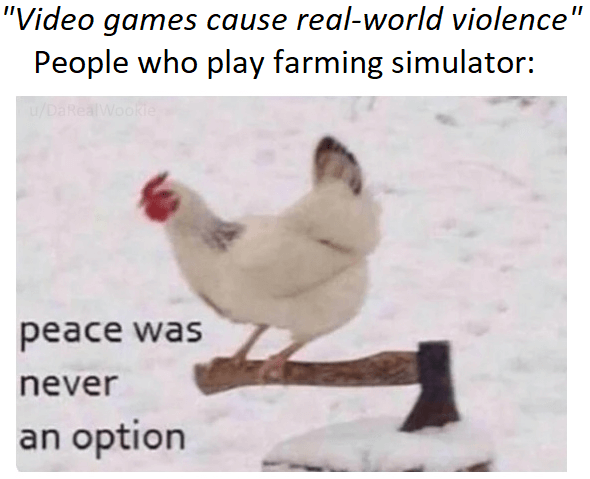 The most controversial to this day remains the opinion that video games make a person cruel and violent. Media tries to use video games as an excuse for immoral and illegal acts. Many studies have concluded that an increase in playing violent video games does not mean violent behaviour in the real world. And besides, it turns out that gamers are more adapted to life than the rest. This is due to the fact that gamers are accustomed to think a few steps forward, notice small details, distribute funds and stuff like that.

As a conclusion, I would like to say that we live in a wonderful time when a video game can cause strong emotions, let us rejoice and be sad, be surprised and scared, think about something more… Games can both harm and benefit, the main thing here is a sense of proportion, as well as a sense of taste. Do not live by stereotypes and try what you like, even when everyone around you thinks that this is “just for kids”.