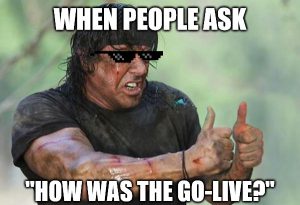 Have you ever wondered what exactly happens, and what flows should be followed once a customer project extension is requested? What if you’re supposed to be a part of this process? This article intends to answer the above-mentioned questions so that you’ll have a better view of the whole idea behind it.

I remember myself feeling excited about the fact that I got involved at that time (a bit more than a year ago) in a customer project extension. Client, let’s call him XYZ (really fancy name), ordered for their warehouse a separate module that would simultaneously perform receiving and sorting of the stock. The whole idea behind this particular project sounded for me un-familiar due to the simple fact that I didn’t have any clue about XYZ itself at that time, nor how their warehouse looks like.

What would normal people think of it, considering the mentioned above circumstances? Exactly, “Hell yeah, let’s do this!”, that’s what I thought at first glance. The good thing is that initially this project was thought to be done by a well-organized team that would consist of:

Once we were assigned to perform this mission, several steps had to be done before the start:

I don’t want to dig into too much detail, about how exactly this extension was developed, skipping technical aspects, about how many sub-tasks were implemented or how many bugs were discovered and solved during different project life cycles. I would like however to mention the organizational part, which in my opinion had a big impact on the final result and was the key to the successful delivery of the product.

Above-mentioned team structure was the perfect combination. Of course, this particular formation doesn’t play well under all circumstances and scenarios. Most probably for another project, either much bigger extension or some which doesn’t really require that much effort, this composition won’t do the trick.

I think that the project manager should do in advance all required calculations for the planning and the needed effort so that the number of people engaged doesn’t change afterwards. I’m pretty sure you won’t agree with this point of view, telling me that during project calculation phase errors can be made. That’s true, but with experience, this risk should be reduced almost to zero probability. In our case either the project manager had 30 years old experience (even though he’s 35 years old), or maybe we just got lucky.

Team members have to know exactly what they are supposed to deliver. To accomplish successfully this part, functional documentation has to be clearly described with as many details as possible. In case of any ambiguities in specs, don’t ever hesitate to ask for clarification. That could happen because of many reasons, like a vague explanation in the initial document, the client doesn’t really know what he wants, or team members don’t have enough knowledge about the project itself.

Full commitment towards the final result

Once the scope of the software extension is known for every participant, we can safely start the division of tasks between each member. Make sure everyone has a workable environment, where local tests can be performed. More than that, keep in mind that it’s always good to hold an initial backup, that might come in handy if you want to start again with your changes from the beginning.

Meetings are supposed to be held frequently, either on a daily or weekly basis, so that the Kanban board can be updated accordingly. During these meetings, all team members should participate. Keep the focus on communication, which is necessary in those particular cases.

Therefore, we finally got our project working only in In-house environment. We didn’t know how it will behave after the update on the production server. Of course, the best way to check this was performing UAT (User Acceptance Tests) on a Test environment. To succeed with this mission we were supposed to travel on-site and try it out. Based on our experience, several points have to be mentioned that need to be checked before UAT occurs:

I have to say that the final result of the UAT process was much better than we expected. We didn’t have to fix that many issues which appeared during these tests.

However, I have to admit that some stressful situations did happen during my visit. Perhaps you want to look more professional in the client’s eyes, but you can’t, just because you’re too nervous in particular cases. In my opinion, I have learned some lessons that have helped me in further similar experiences:

Often there will be several supervisors/managers testing new functionality and I am pretty sure they will find ‘bugs’. If you’re not lucky enough, you’ll get attacked by a group of 4-5 people simultaneously, everyone telling you about some distinct incident they spotted. Don’t panic, keep calm and assure them that each problem will be handled and that for each problem there is currently someone working on it (that’s the advice that was given by one of the supervisors by the way).

It’s better to know how everything is arranged in all subareas. At least you’ll have a better vision about where the extensions stand, compared to the whole system.

Be open-minded to communication

This could sound a bit generic, but I think that customers will more likely greet a person who they can easily communicate with. Even though you need to prove a professional attitude, I think it’s important that your soft skills are at a high level too.

In my opinion, not everything that has been described in this article is a perfect formula of a successful project. This list can be adjusted, but it’s up to you to mention what works perfectly and what should be avoided.